Every time you are in the kitchen, trying out new recipes – you learn something. And usually, the recipe isn’t the only thing you learn. If you have read this blog before, you probably figured out that for me, generally at least 5 hours of my Sunday are spent in the kitchen. Man do my feet get sore! While simultaneous exercising all of my arm muscles on the cutting board – I usually learn a lot.  Today contained at least three lessons.

Lesson 1: I need to stop trying to make spaghetti squash work in new (or weird, as my family would say) scenarios.

I will never live down the spaghetti squash, nutritional yeast + tuna failure of 2014. I tried a “Creamy” Tomato Chicken Sausage recipe with tomatoes, coconut milk, chicken sausage and spaghetti squash. I didn’t make it past the smell long enough to taste it….

Today I tried a spaghetti squash casserole w/ ground beef, diced tomatoes and green peppers. I swear I used every spice in my cabinet. And yet, it still turned out as a bland pile of mush. I think pretty soon my husband is going to stop even TASTING my spaghetti squash dishes (except for the one and only recipe that I can guarantee will turn out right every time – spaghetti squash pizza bake.)

When I attempted the casserole, I made too much squash – I used two small/medium squashes and decided not to use it all for the casserole. Thank goodness or I would have wasted valuable spaghetti squash. So I made the casserole (which we will eat – it just needs a little something like hot sauce) and then threw together a veggie pizza bake.

Lesson 2: It might be worth it to find a way to cook without using EVERY utensil, plate and dish in the apartment.

This was actually my husband’s idea and when he mentioned “helping” me next weekend while I am cooking in order to join his organization skills to my cullinary skills, I was mostly just offended. Until after I spent 40 minutes washing the dishes that wouldn’t fit in the dishwasher. It was at that point that I realized… much to my chagrin that he might be right. Don’t tell him that…..

We received “Against All Grain” by Danielle Walker as a gift for Christmas and I was really excited to dig into it for some recipes to try this weekend. Naturally, I settled on my favorite thing in the entire world, chicken tenders! It was perfect because at dinner on Thursday with my parents, we reminisced about how I refused to eat anything but chicken tenders at restaurants from age 4-18 and if they didn’t have chicken tenders, I didn’t eat. True story. I am happy to report that my tastes have broadened since then….

Let me preface the rest of the story by mentioning that I hate coconut. With a passion. So I must have a really deep rooted love for chicken tenders to be so excited to try chicken tenders coated with shredded coconut.

The chicken tenders were crazy easy to prep and only took about 20 minutes to bake. I did learn that the broil function in my oven will bring me dangerously close to setting off the smoke alarms… parchment paper and broil settings – not the best combination apparently.

And when the smoke cleared, I discovered that these were the best chicken tenders I had ever eaten. They surpassed Mac’s Fish n’ Chips, Chili’s, TGI Friday’s, Joe Sensors, the Egg & I, they beat ALL of the restaurant tenders I had ever eaten. And they contain coconut – how was this possible? So glad that I gave this recipe a chance because this will be a new go-to for us. Dip them in honey mustard and they are even better! 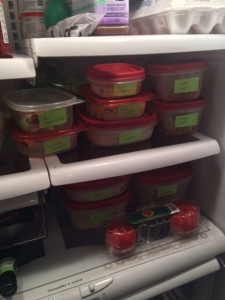 Four rows of tupperware in the fridge is my favorite way to start a Monday! Truth be told, this food will only last us until Wednesday. Its all good though because coming up on the menu for the better half of the week is Shrimp Scampi w/ Zucchini Noodles, Taco Salad w/ Avocado Cilantro Dressing and Chicken Stir Fry! I’ll post yummy pics later in the week!

So now, after half a day of cooking and way too much time spent cleaning – I bid you adieu and it is time for this chicken-tender-fanatic to rest!

With a fridge stocked full of food and all of my messes finally cleaned up, I bid you adieu!

By day, I manage 267 residential apartments. by night, I am in the kitchen experimenting with new and delicious gluten free recipes!

Can I help find something?